THE MAKING OF A MASTERPIECE
SCULPTURES

The 62 sculptures in the Flag Building’s Grand Atrium depict the fundamental beliefs and practices of Scientology.

Creating the sculptures was a story in itself. Over the course of a year, artisans spent 25,000 man-hours to produce the pieces. Each was cast using the centuries-old lost-wax technique, a 15-step process that starts from a full size clay model and then moves through rubber, wax and porcelain moulds, culminating in a molten bronze pour, heated to 2,200 degrees Fahrenheit.

The Italian travertine used in the Flag Building was quarried in Italy and precisely cut and fabricated by skilled craftsmen. Massive blocks were first cut into slabs and then into 35,000 individual tiles, laid out and matched by hand to integrate in colour and vein direction. More than 250,000 man-hours were spent on stone fabrication alone.

Artisans created a mosaic of tens of thousands of hand-cut stone tiles for the plaza entrance to the Flag Building. The medallion, depicting the Flag mountain symbol, is 26 feet in diameter. Created by one of the largest stone factories in the world, the medallion itself is one of the largest mosaics produced in recent history. Each stone piece was hand-laid and fastened into panels before installation.

The raising of the Scientology cross marked a key stepping stone in Flag history and was one of the monumental undertakings that went into constructing the single most advanced and ideal Scientology building on the planet. Installation of the 20-foot-high cross required several hours to hoist it to its final destination atop the Flag Building’s steeple, 175 feet above street level.

Over 100 hand-crafted stone medallions are inset into the floors of the Flag Building. These masterpieces are created using detailed drawings and waterjet technology to allow the inlay of polished Dark Emperado marble to fit precisely—putting Scientology symbology into the very fabric of the building itself. 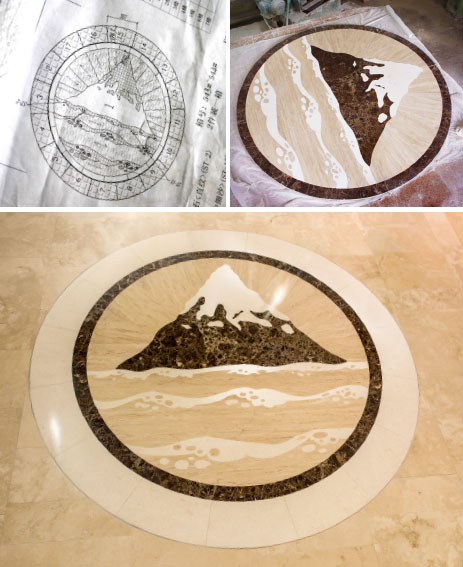 to construct the
Flag Building

The flooring in the Chapel was fabricated from carefully selected “End Grain Wood,” cut at a 90-degree angle. Each piece of wood is about five inches by five inches and laid with the grain side facing upwards, producing a highly aesthetic character, colour and durability. The floor was laid down over a two-month period.

The Atrium and Chapel both feature stone windows made of onyx, cut so sheer that the light shines through. They were originally designed as resin panels, but the contractor substituted the materials with onyx stone as their own contribution to this architectural masterpiece of a building.

Scientology: The Fundamentals of Thought
ORDER